Check out what we have been up to in the community. 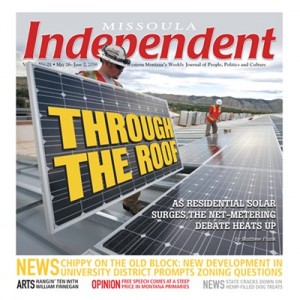 As residential solar surges, the net-metering debate heats up
By Matthew Frank

Residential solar in the U.S. grew 66 percent in 2015 over 2014, the largest annual growth rate to date, according to a recent report by GTM Research and the Solar Energy Industries Association, or SEIA. In 2015, residential solar installations amounted to 2,099 megawatts, which, when converted, equals more that 1,600 megawatts. By comparison, Montana’s coal-fired Colstrip plant, the second-largest power plant west of the Mississippi River, has a peak output of 2,100 megawatts. The International Renewable Energy Agency reports that between 2010 and 2015 the cost of solar photovoltaic panels dropped 80 percent, fueling the solar surge around the world. 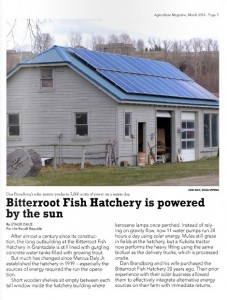 Bitterroot Fish Hatchery is Powered by the Sun

After almost a century since its construction, the long outbuilding at Bitterroot Fish Hatchery in Grantsdale is still lines with gurgling concrete water tanks filled with growing trout. But much has changed since Marcus Daly Jr. established the hatchery in 1919 – especially the sources of energy required to the operation. Dan Brandborg and his wife purchased the Bitterroot Fish Hatchery 20 years ago. their prior experience with their solar business allowed them to effectively integrate alternative energy sources on their farm with immediate returns. 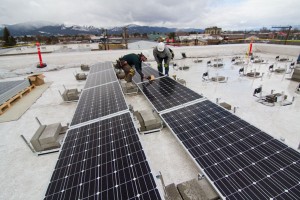 City Life director Bob Grace was joined by 10 volunteers and a crew from SBS Solar on Saturday to install the 23,400-watt solar array. Nine tons of ballast ensures the panels won’t leave the roof. The only change to the physical roof was two small holes drilled to conduit the energy into the building.

Bitter Root Brewing has two solar arrays on its roof that have saved $2,000 in energy costs since June. USDA Rural Development and U.S. Sen. Jon Tester, D-Mont., recently recognized them for their efforts. Jason Goeltz, general manager of Bitter Root Brewing, said the business is committed to solar energy. It has a large southern solar array, a small western array and a monitor displaying the performance of the solar panels and overall energy use to customers.

WEST YELLOWSTONE (CAP) – The Environmental Protection Agency and local officials are scrambling to contain a spill at a solar energy farm in Yellowstone Park near Lamar Buffalo Ranch that is dumping thousands of lumens of sunlight back into the atmosphere every minute. Experts call it the worst spill in 22 years. “Yeah, we started getting calls from park rangers that things were getting pretty bright during the day,” said Altair Energy spokesperson Rhett Gartner. “When we went to check out the scene one evening and didn’t even need flashlights, we knew there was a problem.”