What follows is a great Q&A with Bert Lindler and Kristi DuBois:

1. Why did you decide to install solar panels?

When we first bought our home, we realized that the south-facing roof offered an opportunity for solar photovoltaic panels and solar hot water. We want to minimize our environmental impact and installing solar panels is one of the easiest ways to do so.

Kristi feels strongly that every south-facing roof is wasted space that should be generating electricity. Industrial forms of “green” energy like commercial wind and solar farms impact a lot of habitat for wildlife, or in the case of solar farms, replace the habitat completely with solar panels. Rooftop solar units have no effect on natural habitat, so they are a much greener way to meet our energy needs than industrial energy facilities.

We were considering refinancing our home to take advantage of low-interest rates at about the time we were reminded of the subsidies available for installing solar photovoltaic panels. Once we had the roof evaluated for solar power potential and had received a bid for the installation (along with an estimate of the subsidies), we knew we wanted panels. 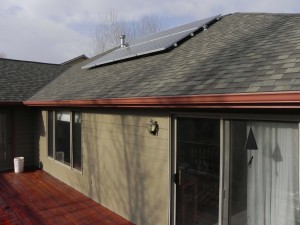 The first challenge for us was approval from the homeowners association for our installation. Our installer prepared drawings showing the appearance of the eight panels mounted on our roof. We took to the drawings to our immediate neighbors and discussed our plans. All but one of the neighbors were supportive and the remaining neighbor said that while he didn’t want to look at solar panels on our roof, he understood why we wished to install them and would respect whatever decision the homeowners association reached. The association’s architectural review board approved our request.

The next challenge was a couple of tall non-native trees growing in our yard. We were considering having them removed anyway, but did so promptly after we learned that they would shade the panels. We still have some shading in winter from our aspen trees, but the effects on our power production are minimal. We left the trunk of one of the trees standing as a wildlife snag.

3. How long will it take for your system to pay for itself?

Our system includes microinverters that convert the DC electricity produced at each panel to AC electricity we can use in our home or return to the grid for use by other Northwestern Energy customers. The microinverters reduce the risk that more than one panel will be affected by shading and are provide real-time monitoring of the power being produced by each panel.

Our account is credited if we produce more electricity than we use (only likely during the summer). This arrangement allows us to receive full benefit of all the power we produce without requiring us to buy a bank of batteries to store power.

We do expect that our home will be easier to sell and may command a higher price because of the panels.

4. How do you see your solar panels contributing/fitting into the larger Missoula effort against climate change?

Our purchase reflects our personal values, greatly influenced by subsidies offered by the power company and federal and state governments. Even though Missoula’s solar energy potential is not as high as in areas with more sun, our community could reduce our environmental impact if more of us took advantage of the subsidies that turn roofs into power plants.

What sort of lessons has the process of installing your own solar panels taught you?

Snow melts quickly off our south-facing roof. We had expected the snow to melt just as quickly off the panels. It doesn’t. The panels, mounted an inch or so above the roof, have cold air beneath them.

We use a pole-mounted plastic snow rake to clear snow from the panels and onto our deck. The deck never used to get shoveled, but it does now.

In general, we were extremely lucky. The cost of solar panels has dropped dramatically in recent years and the cost is still dropping. The installer handled the $6,000 reimbursement from Northwestern Energy so we didn’t have to pay that cost up front. The remaining up-front costs weren’t a problem because we refinanced our home loan when interest rates were at record lows.

The panels were installed on schedule at the agreed-upon cost. Within a week after our panels were operating, Northwestern Energy installed the special meter that gives us credit for the electricity we produce.

We enjoy having the panels and we’re happy to see them producing more electricity as the days keep getting longer.