This system is comprised of 40 -255 watt modules to create a 10kW array. The brewery building is located next to a baseball park which includes a ball net held in place with a number of telephone poles south of the main building. Add to this a cell tower to the Southwest. All of which creates areas of shading at specific times through the solar day.  Read More 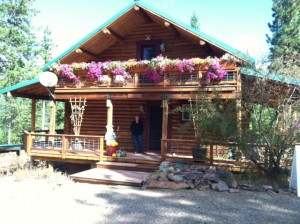 This six module system was a bit different for the SBS crew. The owners have lived in this beautiful off-grid home perched on a knoll in the timbered Ninemile Valley for some time. For 13 years they have been happy with a solar/battery/generator system as it supplied all of the electrical needs. They had the opportunity to bring in grid power last year and shared the line extension cost with a neighbor.

This summer they suffered a lightning strike making landfall on two Ponderosa pines some 40 feet from the solar array. The surge of electricity blew the bypass diodes on the modules and the controller on the propane generator. Fortunately, it did not affect the batteries, the inverter or charge controller. Read More

SBS Solar was really excited to work on this bimodal system.  It is just a few minutes from downtown Missoula, and the customer wanted to be fully self sufficient when the grid was down.  The customer had a slightly higher then average residential load so we sized a 36 module Canadian Solar CS6P 250P for a total of 9 kW system capable of supplying over 10 Mega watt hours annually.

We used eight of the 6 volt Unigy II 1016 amp hour Gel batteries for storage.  At over 400 lbs a piece just getting the batteries in the basement was a feat for four strong guys.  We were concerned about the end nailed stair treads giving it up with the weight we were applying, but thankfully no issues. Read More 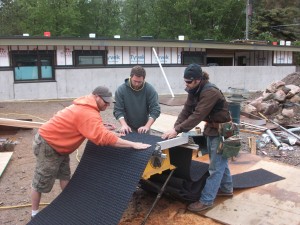 A ballasted solar PV mount is a graceful, highly engineered solution that secures the array without damaging the flat roof. It is compatible with the usual framed photovoltaic modules and typically does not require roof penetrations. Made from lightweight and strong aluminum construction, this Uni-rack Rapid Rack G-10 system is at a 10-degree tilt and will look pretty sweet when it’s done.  Read more

The Moore’s of Hamilton, Montana completed this installation Fall 2010 of a 10 module photovoltaic system which will provide 40% of the electrical power used in their home.  The pole mount solar array is mounted on a tracking system which follows the sun from East to West through the day.  The electricity is run into their home where it powers any electrical appliances that are currently in use.  Read More